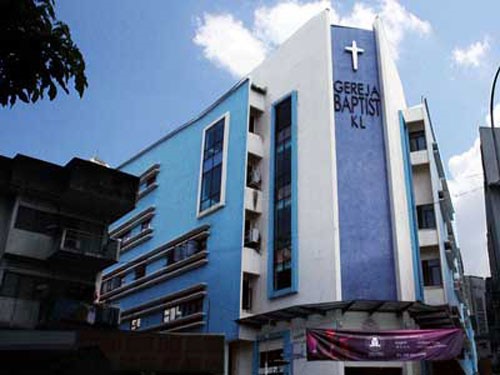 Located in the heart of the shopping district of Kuala Lumpur in Bukit Bintang is the Kuala Lumpur Baptist Church. It is one of the oldest churches here which has been around for more than half a decade now. The Kuala Lumpur Baptist Church is housed along Changkat Bukit Bintang on top of the hilly slope leading towards Jalan Bukit Bintang. It is situated at the intersection that overlooks Jalan Alor, a very popular tourist spot for local food here. As a protestant church, KLBC is part of the Baptist World Alliance Group through its affliation with the Asia Pacific Baptist Alliance.

Kuala Lumpur Baptist Church offers worship sessions for Christians from all walks of life where they are provided in various languages. As the main centre of this church, KLBC provides services in English Language, Cantonese, Mandarin and in Filipino for every community group respectively. Known very much for its Chinese-language services, KLBC has one of the largest Chinese worshippers in the Klang Valley which the church has been servicing for several generations now.

The church was actually founded by missionaries who came here from the United States more than 60 years ago and has since grown by leaps and bounds in terms of membership and influence. Settled in Bukit Bintang, KLBC has grown steadily despite being in one of the areas formerly known for being rowdy and one of the so-called ‘red light districts’ of Kuala Lumpur. Today, KLBC continues to provide services for its members as Bukit Bintang grows to become one of the most modern and dynamic places in Malaysia.

KLBC has since expanded where it has a branch in Desa ParkCity further out from the city centre. The Desa ParkCity branch offers services in English Language, Mandarin and in Korean as well. The church provides a wide range of support services for its members from all age groups including the young and old via its Youth and Senior Citizens movements respectively. Besides that, KLBC has very active groups in supporting its members through prayer, cell groups as well as being involved in various community service projects.