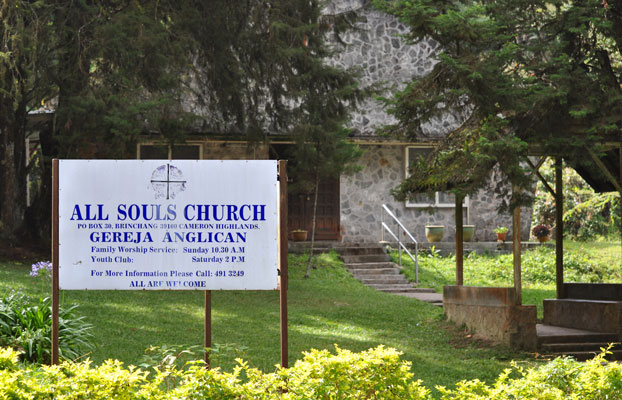 The All Soul’s Church here is an affiliation of the Anglican Diocese of West Malaysia as well as a part of the Malaysia’s Council of Churches. The building was opened in 1958 which was then known as Cameron Highlands Church. Then, the committee members of the church were mainly expatriates who were based here like Captain Bloxham who was from the police force of Tanah Rata and Major Stokes who was the principal of Slim School, among others. Slim School is at present the Malaysian Commando Camp and it was here that the Vicar of Ipoh and other expatriate clergy would hold services occasionally in Cameron Highlands. The Cameron Highlands Hotel was used for this purpose as well.

The Malayan Emergency had brought a lot of British Military Forces here and a lot of them had visited Cameron Highlands to attend the services. Mss Anne L.P Griffith Jones had in 1958 offered a place around the grounds of Slim School for a School Chapel to operate which would consequently become the place for the church to be built by the Diocese. Funds began pouring in and before long, the church was completed that stemmed from a dismantled Nissen hut. To commemorate the lives of soldiers who sacrificed during the 2 World Wars, the Bishop of Singapore and Malaya, Rev Bishop Baines named it All Souls’ Church and it would then continue to grow by leaps and bounds.

Today, the church continues to play an important in transforming lives and for the people around Cameron Highlands where it holds weekly fellowship and prayer meetings including a Tamil Fellowship on Fridays. Besides that, a Malay Language Service is provided as well by SIB (Sidang Injil Borneo) on Sunday evenings while the English services are held at 10.30 on Sunday mornings.