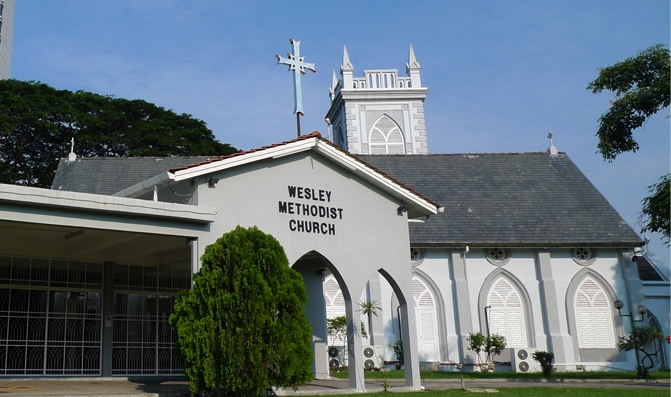 The Wesley Methodist Church is perhaps one of the oldest churches in the country. It has been around for more than a century which possibly dates back to 1891. The Wesley Methodist Church is said to be started by Rev D D Moore back in the days when he used the Penang Town Hall that year to carry out the first English Evening Service. He would then move to a rented home for missionaries and the first Sacramental Service was held later that year. With 3 members, the church started with a Sunday School at the Armenian church.

The church will then move to a few locations which in 1910 would be held at Larut Road. The Cornerstone was laid in 1911 at the English Church Building and it would then move again. The Wesley Church Penang was used by the Japanese army during the Second World War and the activities were revived after the war.

From there, the Wesley Methodist Church Penang went through several rounds of renovations and expansion while membership continued to grow as well. The MYF or Methodist Youth Fellowship was organized in 1947 and continues to operate until present day while the Wesley Methodist Church reorganized the WSCS or Women’s Society of Christian Service a year later. In 1951, the church started the Intermediate Youth Fellowship while the 2nd Company Boys’ and Girls’ Life Brigades were established a year later. In 1954, the church set up the Youth Centre to provide more services to the growing youth of the church.

In 1987, the Wesley Methodist Church started 2 services on Sundays. The church would then continue to grow by leaps and bounds to present day where it remains as one of the prominent Methodist churches in Penang and Malaysia.

Today, the Wesley Methodist Church carries out 2 Sunday services and 1 Hokkien service catered for those in this community. Besides that, the church provides necessary support groups for people from all walks of life. This includes activities and programmes for the young ones as well as for senior citizens who require services in terms of fellowship, sharing and others.