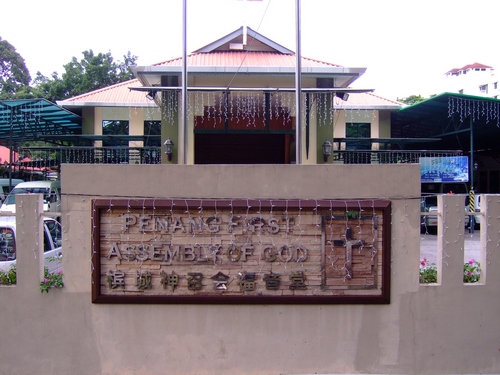 The birth of Penang First Assembly of God is said to have started in the 1950s when Evelyn Hatchett sought for direction from God after China closed its doors then. The word Penang had resonated during her prayers and she found this island on the map.

Evelyn would then seek out to find Penang only with faith to bring the Word of God to the people and to spread the good news of salvation. Upon reaching Penang, she stayed in Green Lane and started the first Sunday School. After that a bilingual Sunday Service in Chinese and English will follow suit. Then, the church had only 10 people but it soon grew to include a choir, a youth movement and prayer service.

Through God’s grace, more help came in with a group of Hong Kong members helping out in the Chinese Ministry as well as several other missionaries. More people would come in and help but the church did not have a permanent location. In 1960, a building fund was raised which would later on be used to purchase the premises in Macalister Road which is where the First Church is to present day with new facilities being added along the way.

From there, the Penang First Assembly of God did not look back ever since with more ministries being added to support a larger group of members. It carries out programmes, activities and events to spread the Word of God through fellowship, sharing and worship sessions held weekly.