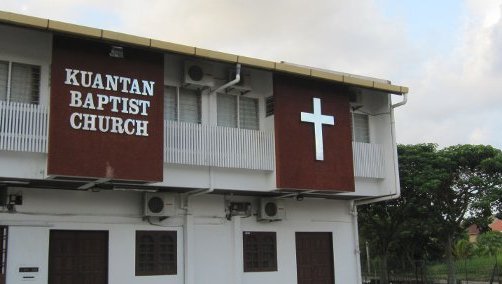 The Kuantan Baptist Church is one of the churches located in the city of Kuantan, the capital of Pahang. Established more than 35 years ago, the Kuantan Baptist Church has grown in numbers and size since is humble beginnings. During the 1970s, there were many Baptist churches being opened around Peninsular Malaysia. However, the east coastal states were slower and a survey team was then sent to Kuantan to determine the possibility of setting up a church from this denomination there.

About that time, there were already many Baptist families who were residing in the capital and they all came together to see the establishing of the church through. This would be the birth of Kuantan Baptist Church which would be the first along the east coast. Hence, it was then decided that a full time servant to be based there and this was taken up by the First Baptist Church from Petaling Jaya.

The church started out at the home of Bernard Ng Boon Keat in 1972 where Friday night meetings were held but because there was no proper meeting place and location, the effort was discontinued. Later on, Hugh and Kathryn Smith felt God’s calling to administer in the East Coast after establishing the SEA Park Baptist Church and went on to revive the Kuantan Baptist church, starting out with their own home.

After several rounds of discussions and deliberations, the first service was held at the home of the Smiths and before long, a dedicated house was used for the worship sessions and this was done through the rented terrace house in Jalan Telok Sisek. Later on, a store in Pekan was used and then, a Chinese service was added. Membership continued to grow at the Kuantan Baptist Church would eventually need a larger space. A corner coffee shop’s first floor was used in 1978 and in the same year, the Chinese congregation moved out to become the Kean Tao Baptist Church.

From then, on the Kuantan Baptist Church grew in numbers and branches to the other east coast towns and today, it is one of the prominent churches here, spreading the Word of the Lord and administering to the people in the vicinity.