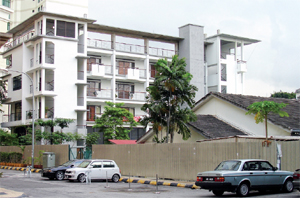 Jalan Imbi Chapel is one a Brethren church located in the heart of Kuala Lumpur. It stemmed from the early assembly missionaries which came to Kuala Lumpur in 1891 which was then operating at Bluff Road Gospel Hall. The missionaries had then come from Plymouth, England and it grew in size and membership in the following decades.

In 1922, the Venning Road Gospel Hall opened and in 1930, the Bukit Bintang Girls’ School opened and then in 1962, Jalan Imbi Chapel was opened after it was found that Venning Road was not suitable as the government had planned to build the National Mosque there.

Initially, Jalan Imbi Chapel was built to accommodate about 300 people while there was a library, kitchen and recreation room on the auxiliary building. The church will then continue expanding in the next 2 to 3 decades which brought together people from all walks of life while there were new branches opening in places like Cheras, Kajang, Bangsar, Ampang and Setapak.

Then, in 2001, the Bukit Bintang Girls’ School was taken over to build Pavilion Shopping Centre and the original Sunday School premises had to be moved. This gave rise to a new 4-storey building where JIC now operates Bible Study classes, multi-lingual Sunday services and other related activities.