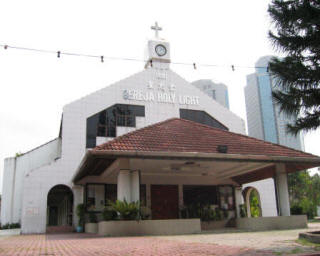 The Holy Light Church in Johor Bahru is one of the oldest churches in the state capital. It was founded by Rev John Angus Bethune Cook, a missionary of the Presbyterian Church of England. This was in 1886 which was when the missionary came to Johor Bahru where he would be until 1924 in which he returned and retired in England after spending most of his life contributing to working for the Lord.

Through his time in JB, together with some prominent people, Cook was able to set up the church from the then Sultan Abu Bakar where the Holy Light Church would be at until present day. Located along Jalan Gertak Merah, the Holy Light Church still stands prominently since its early days when it used to run 2 services on Sundays, one in English Language and another in Chinese. This is because there was a large community of Chinese people in the community where most of them were from the Teochew dialect.

Using timber, the old church building was built and is currently used as the Youth Hall and was previously used for Chinese worship sessions. It was only in 1952 when the English service became a main offering at the Holy Light Church. Some 50 years later, the English session would relocate to the Hillville premises where the church continues to play an important role in developing the Christians in the state as well as a living testimony to the people in the region about the power of Christ and His teachings.