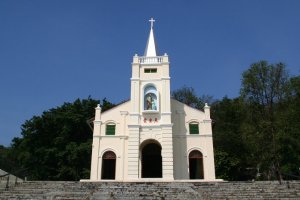 The Church of St Anne is a Catholic church located in Bukit Mertajam along the northern region of Peninsular Malaysia. It is one of the earliest churches to be established in the country which dates back to as early as 1840. Since then, the Church of St Anne has grown in numbers and congregation size where it is currently one of the very prominent Catholic churches not only in the northern parts but throughout the country as well.

In 1833, the first early Catholics came from Province Wellesley (now known as Seberang Prai) who were mainly from the Indian and Chinese communities. They will continue to grow in numbers and moved to places like Macang, Bubok, Permatang Tinggi and at Bukit Mertajam where the Chinese Catholics will set foot in 7 years later before growing larger and further to other communities.

Then, priests came from France and it was only in 1846 that a chapel was envisioned to be built and due to the popularity of St Anne as a patron saint among the French, the church was enacted and named after her at the hill here. Several priests will then come along and take over St Anne’s Parish and when Fr Maistre took over in 1865, a larger chapel was built. However, it was only in 1888 that the first church was built with more additions coming along the way later on. The church survived the war and through to the state of Emergency soon after which by independence, the scond church next to Kim Sen School was built.

Today, the Church of St Anne continues to provide the platform and avenue for believers to come together in the Word of God to worship and fellowship. Members of the church join the programmes, activities and important events throughout the year where they can learn and grow in their faith while working with each other. Mass services are celebrated each week while there are concerts, evangelical programmes and many other events to spread the Word of God to the people in the community and non-Muslim Malaysians from all walks of life.