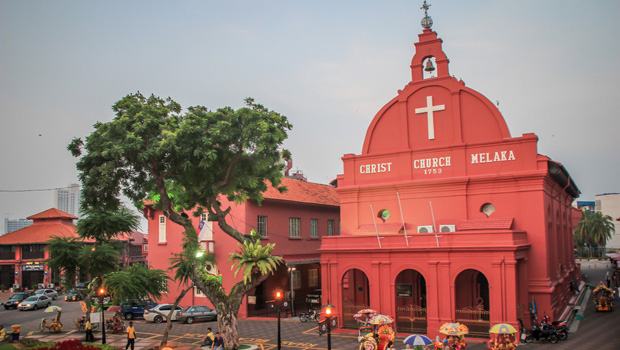 The Christ Church in Malacca is perhaps one of the oldest churches in the region. This Anglican church was founded back in 1753 and has grown to become one of the most prominent churches in the history of Malaysia and the development of the Christian faith in Southeast Asia.

That which makes Christ Church so unique is that it remains as one of the most iconic landmarks of Malacca which was built in 1741 and completed 12 years later. The Dutch Colonial architecture and design of the church remains clearly seen to present day where the church is part of the Diocese of West Malaysia. In fact, Christ Church is known to be the oldest Protestant Church in Malaysia which is still active after more than 250 years in existence. Today, Christ Church runs 3 Sunday services each week with one in English, one in Mandarin and another in Bahasa Malaysia.

Since it was built and opened to Christians, the Christ Church has already undergone several phases of changes including the clergy, expansions and other aspects. Today, it continues to play the role of the church for Anglicans in the state while many who visit Malacca will surely visit the church for its historical and heritage outlook. Another unique element of Christ Church is its church bell which can still be heard ringing. The bell however is believed to have been used for another purpose before it was brought here as its inscription states the date 1698, long before the church was built here.